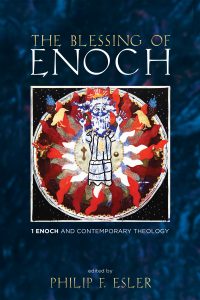 I have just received my copy of the proceedings of a conference on Enoch literature and contemporary theology at the University of Gloucestershire, for which I provided an essay on the Similitudes of Enoch (P. F. Esler ed., The Blessing of Enoch: 1 Enoch and Contemporary Theology (Eugene, Or: Wipf & Stock, 2017).

The Similitudes of Enoch (1 Enoch 37–71) is one of the most difficult and contentious of the texts that scholars have long recognized may have some bearing on the earliest beliefs about Jesus. It describes a messianic figure (variously called the Elect One/Chosen One, Son of Man and Messiah) who exists from before the creation of the Sun, Moon and Stars (1 Enoch 48:3) and who, in various ways, appears to be identified with the one God of biblical revelation: he is seated on a throne of glory, is “ruler of all,” is given the language of scriptural texts about Yahweh and receives worship.

For many years, since the realization in the 1960s and 70s that copies of this part of 1 Enoch are not preserved in the library of the Dead Sea Scroll community based at Qumran, it has been common to date the Similitudes to the period after the first formative decades of the early Christian movement. Some have even speculated that the Similitudes’ remarkable messianic expectation is a response to early beliefs about Jesus. Many, notably James Dunn in his Christology in the Making, have therefore rejected the view (that was common in older scholarship until the 1970s) that the Similitudes represents an established Jewish view that a divine messiah would come from heavenly pre-existence. For Dunn a pre-existent messianic hope is not pre-Christian and a pre-existent Christology appears only in the later strata of the New Testament; it is not present in the Synoptics or in Paul’s letters.

In the first volume of my Jesus Monotheism (chapter 5) I point out that there has been a dramatic sea-change in the study of the Similitudes in the last 15 years. In 2005 forty-four specialists gathering under the auspices of the Enoch Seminar, led by Gabriele Boccaccini, reached almost unanimous agreement that the Similitudes are pre-Christian, with many favouring a date in the first century B.C.E. And there are many striking similarities between the portrayal of the Son of Man-Messiah in the Similitudes and the Son of Man figure, or title, in the Four Gospels that mean we now have to take seriously the possibility that the Similitudes’ messianism influenced Jesus and his followers.

Whatever its formative relationship to the Jesus and his first followers’ beliefs, the Similitudes’ theology and messianic hope needs to be explained. As a thoroughly Jewish text the Similitudes challenges some modern accounts of the shape of Jewish monotheism. Certainly, we need to explain how a Jewish author and community of readers could envisage a messiah in such strongly “divine” terms. In volume 3 of Jesus Monotheism I will set out an account of Israel’s beliefs and expectations that offers such an explanation. And the essay that has now been published sketches some of the observations and conceptual moves that I will make in that volume.

Building on an earlier publication in which I have argued that the Similitudes’ messianism is a response to aspects of the Greco-Roman ruler cult and emperor worship (at the end of the C1st B.C.E. or the early decades of the C1st C.E.), I argue that it is also indebted to an older and well-established, biblically-based, distinction between the priestly office and the person of the king. Unlike kings, the high priest is an office not a person. The office transcends the identities of those who hold it. The way that works for the high priest is especially clear in the description of the high priest as a divine figure in Ben Sira 50. The office pre-exists the personality of each incumbent and it will continue to exist after their death. The Similitudes, I contend, projects that distinction on to a mythological, eschatological, horizon. The Son of Man-Messiah in 1 En. 37–71 is almost wholly devoid of personhood, as has sometimes been observed. He is simply the one-God-made-manifest, with no separate, individual, identity or personality that would threaten the identity of the one God. He is to the eschatological scenario what the high priestly office is within the real-time liturgical context of the temple-as-microcosm.

Because the Gloucestershire conference aimed at pioneering work on the relationship between the early Enoch literature and theology, the essay concludes with some reasons to think that the study of the Similitudes is no threat to Christian theology. Indeed, I close by pointing out that, if the main points of my explanation of the Similitudes’ distinctive “divine” messianism are on the mark, then this remarkable text may lead us to conclude that the so-called dirty great ditch between the Christ of Faith and the Jesus of Faith is not as wide and deep as many have supposed.