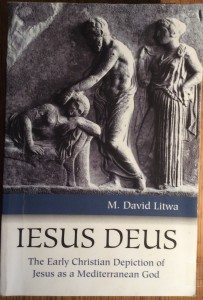 David Litwa has written an important book on the relationship between Greco-Roman traditions and Christological material in early Christian texts (in the New Testament and beyond).

It is a thoroughly enjoyable, informative and stimulating read, with fresh ideas that should be of interest to anyone studying the earliest beliefs about Jesus.

In essence, Litwa argues that “early Christians imagined and depicted Jesus with some of the basic traits common to other Mediterranean divinities and deified men.” (215).

Larry Hurtado has just reviewed the book on his blog. He is appreciative of some of Litwa’s proposals, but also strongly critical of “errors” that he thinks Litwa has made. In particular, the review makes a forceful response to Litwa’s lengthy critique of Hurtado’s work that Litwa thinks exemplifies an unhelpful and theologically motivated attempt to insulate Christological origins from pagan, Greco-Roman influence.

In my own recent work on Christology I have become convinced (in a way that I was not when I wrote my doctoral dissertation) that interaction with Greco-Roman traditions was an important factor in the formulation of the earliest beliefs about Jesus. I agree with Litwa that there has not been as much discussion of this possibility in some circles as there should. And I am not sure that Hurtado has fully heard or understood the nature of Litwa’s criticisms. In particular, Litwa makes some persuasive comments on Hurtado’s negative views of the possibility that a biblical and Jewish monotheism could accommodate some notion of “deification”. (I also touch on this issue in an excursus at the end of Jesus Monotheism Volume 1. And in volumes 2, 3 and 4 of Jesus Monotheism I will set out some fresh proposals for the role of Greco-Roman traditions at the origins of the belief in Jesus’ divinity).

On the other hand, Hurtado is right, I think, to press Litwa on the matter of research objectives. Hurtado points out that his own work has been concerned to explain “the historical origins of the phenomena of Jesus-devotion”. Litwa seems more concerned with the literary features of early Christian texts. On my reading of Iesus Deus, Litwa moves tentatively towards the historical origins question in his final chapter (on the gift of the name above all names in Phil 2:9). Litwa comes in that chapter to the conclusion that the idea that Jesus is given the divine name of Israel’s God after his death “was adapted from the imperial conventions of the larger (Mediterranean) culture contemporary with the author of the hymn” (in Phil 2:6–11). This surely raises important historical questions. If the gift of the divine name Yhwh-Kyrios to the exalted Christ in Phil 2:9 is an idea adapted from the non-Jewish world, then when, in the development of early Christian life and thought, was that idea promulgated? And by whom? And for what reason? Does Phil 2:9 exemplify a transition from a Christology in which Jesus is extraordinary, but not divine, to one in which he is “deified” and deemed worthy of worship? Or does the Philippians hymn simply express a much older identification of Jesus with Yhwh-Kyrios (that was originally formulated without reference to Greco-Roman traditions) in a way that would resonate in a Roman city like Philippi?

Litwa’s book is perhaps one of the most persuasive—certainly the most recent—to argue for the presence of Greco-Roman motifs in early Christological texts. As the case steadily mounts for the presence of those motifs in early Christian documents, surely now there is a need to explore the historical questions those motifs raise. Above all, what role did they play, if any, in the origins of Christ devotion and the belief that (as R. Bauckham has put it) Christ is included in the identity of the one God revealed in Israel’s Scriptures?